Rocketing unemployment, worries over COVID-19 and stricter mortgage requirements are causing some home buyers and sellers to pull back, which could push home prices lower.
“The fewer people who have jobs, the fewer people who are going to qualify for homes even if they want to buy a house,” said Greg Powers, a Realtor with Keller Williams Metropolitan Realty in Bedford.
“I think the fear of losing your job is also putting the brakes on for a lot of people,” Powers said Wednesday.
Powers, who has seen a lot of activity on some of his home listings, said he lost a house sale a few weeks back because a lender raised its minimum credit score for a mortgage before the buyer could close a deal on a home in Deering.
With more than 100,000 Granite Staters filing for unemployment in the past month, real estate agents across the state already are noticing how the health and economic threats of COVID-19 are keeping some buyers and sellers away.
Nearly seven in 10 Realtors surveyed this month said they experienced at least one buyer deciding to delay a home search in the previous two weeks. And 63% reported they had experienced at least one seller postponing a new property listing, according to the New Hampshire Association of Realtors.
“It feels like more of a wait-and-see than an outright stop,” association president Marc Drapeau said in a statement. “The $64,000 question, and one that we aren’t prepared to answer with any certainty at this point, is just how long a pause.”
“Economic uncertainty is the devil of the housing market,” said Laconia economist Russ Thibeault. “I think it’s just going to be a significant impact on sales volume and probably on prices, too, eventually.”
The median price for a single-family house in New Hampshire topped $311,000 last month, near its all-time peak.
“I think (prices are) going to stop going up, and there could be a slight decline in prices,” said Adam Dow, CEO of Dow Realty Group for Keller Williams Lakes and Mountains Realty, based in Wolfeboro, with offices on the Seacoast and in ski country.
“It depends on how long the quarantine lasts,” Dow said.

On Thursday, the federal government reported new housing starts in March fell 22.3% nationally from a month earlier, including a 17.5% drop for single-family housing starts.
A day earlier, a new national report said home builder confidence in the market for new single-family homes saw the biggest single monthly drop in the history of the National Association of Home Builders/Wells Fargo Housing Market Index and its lowest mark since June 2012.
“This unprecedented drop in builder confidence is due exclusively to the coronavirus outbreak across the nation, as unemployment has skyrocketed and gaps in the supply chain have hampered construction activities,” NAHB Chairman Dean Mon said in a statement.
March home sales in New Hampshire showed 1.2% fewer finalized home sales than a year ago, but the median sales price was 9% higher than in March 2019.
The Seacoast Board of Realtors reported a 13-community region recorded its best March since 2014 for homes priced in the $400,000 to $700,000 range. The March median sale price of $510,000 was the highest since last May.
Dow said one client, a dentist from New York City, was looking to leave the densely populated city for a lake house in New Hampshire
“New Hampshire becomes more attractive for the four seasons and less population density,” Dow said.
For people buying a home, interest rates for a 30-year fixed-rate mortgage hit a U.S. weekly average of 3.31% as of Thursday. Rates peaked at 4.94% in November 2018, according to Freddie Mac, a company that buys mortgages and repackages them to investors.

To keep safe, more buyers and sellers are setting ground rules for home visits. The seller, for example, will turn on all the lights and unlock the door, Dow said.
“Everyone wears a mask. Everyone wears gloves. There’s booties,” he said. “We’re recommending (potential buyers) get gas in their hometown, and they just come to look at the house and leave.”
Dow said there are still too few homes for sale, and buyers are still “paying pre-COVID prices” so far.
“I think New Hampshire on the other side of this (pandemic) has a lot of things going for it,” Dow said. “People are talking about rebound or pent-up demand. I can see people wanting to move out of the city and moving to New Hampshire.” 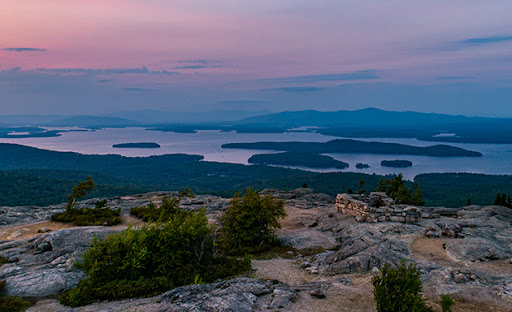 The impact of second homes in New Hampshire's Lakes Region